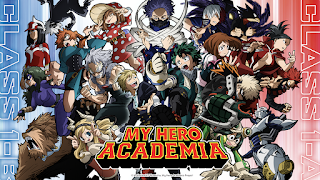 My Hero Academia is a Japanese animated series written and produced. By kohei Horikoshi . The story simply talks about a boy born without super powers and it’s quite common for everyone to have super powers , this doesn’t stop him continues to dream about getting the powers eventually he is granted powers by one of the most powerful Japanese heroes (All might).

in my hero academia who is the strongest?

Well there’s no way to actually know who the strongest characters in m hero academia may be, because the show is new and there’s quite more for us to encounter watching the show  . But we are going to go down to three major characters compare their powers strength and weaknesses . This characters would be the all for one users , the one for all users and Eri .

Firstly let’s talk about the one for one users being a fan of the show we came accros the two major protagonists of the show all might and izuku from what we saw this characters are so strong that there could move as fast as the wind , perform an air punch that could destroy a villain a hundred miles away , could destroy a giant robot with a single flick of a finger . There’s simply no ending to this power , but with great power comes great weaknesses this power is too great for it’s host as we could see in several events between all might and izuku . The power has ended up destroying bones , caused internal injuries . Is it really worth having a power for it to end up trying to kill you . Well for now that’s all we know about the one for all power , According to the producers of the TV show , we were made to know that we would see new upgrades of this power because of it’s new host so let’s see how it plays out .

According to the TV show there’s not much seen on the big screen about this quirk . But for what we know the quirk is more like a villains quirk . The power is really great for one thing who wouldn’t want a power that can take any power and give to anyone of it’s choosing . The owner of this power can store any quirk of it’s choosing in him and something most fans don’t know the famous one for all power actually came from this power . There’s a flaw to this power . While the one for all is a power of gift this all for one is more like a taker that disposes disposed of the one that was there before taking the power .

We don’t actually know anything much about this character , but we hope to see her in more action later in the movie . But from what we know now due to our personal resources on my hero academia this character has the ability to return a damaged body back to his previous state before it was damaged . So this is more like a healing quirk not offensive quirk , I know you all might be angry asking why this power was included but here’s why , she can return any human body to it’s previous state so maybe she’ll be able to cure all might or even heal or restore izuku’s body if  he ever uses all might at hundred percent .

Anna Kendrick Slams Hollywood’s Secist And This Has Been A Hot Topic Lately.

Kate Middleton might auction her workout wear for a very low price__See Details.

Kaley Cuoco Goes Strapless By Her Pool In $12 Million Home

Prince harry and Meghan Markle to become the next king and queen after Williams...

NEWS Eunice Johnson - November 13, 2021 0
RINCE HARRY "often" said he would be happy to be King after Prince William insisted he P did not want the throne, Princess Diana told...

Unbelievable : prince harry announced himself as the next king to the throne

NEWS Eunice Johnson - November 13, 2021 0
PRINCE HARRY "often" said he would be happy to be King after Prince William insisted he did not want the throne, Princess Diana told...

ROYAL FAMILY Eunice Johnson - November 13, 2021 0
PRINCE HARRY "often" said he would be happy to be King after Prince William insisted he did not want the throne, Princess Diana told...

ROYAL FAMILY Eunice Johnson - November 13, 2021 0
Princess Charlotte is already a high profile figure in the Royal Family being the only daughter of a possible future king in William -...

NEWS Eunice Johnson - November 13, 2021 0
PRINCE William reportedly "regrets" the difficult conversation that sparked the "beginning of the breakdown" in relations between himself and his younger brother.    ; The relationship between...

ROYAL FAMILY Eunice Johnson - November 13, 2021 0
In the early days of their romance, Prince Harry and Meghan Markle tried to keep their budding relationship under wraps.     They met on a blind...

NEWS Eunice Johnson - November 13, 2021 0
Prince Harry and Meghan Markle’s daughter was born, there have been many questions about Lilibet’s christening, such as: When will it be? And: Where...

NEWS Eunice Johnson - November 13, 2021 0
Prince Harry and Meghan Markle were seen as "very difficult to deal with" by the royals and some family members "quietly welcomed" their decision...

NEWS Eunice Johnson - November 13, 2021 0
Since Prince Harry and Meghan Markle’s daughter was born, there have been many questions about Lilibet’s christening, such as: When will it be? And:...

Harry and Meghan ‘unlikely’ to return to UK for Lilibet’s christening, claim experts

NEWS Eunice Johnson - November 13, 2021 0
Prince Harry and Meghan Markle are "unlikely" to bring their baby daughter Lilibet to the UK so she can be christened, according to a...

ROYAL FAMILY Eunice Johnson - November 13, 2021 0
THE QUEEN cancelled a number of royal engagements in the past month amid a health scare, however royal expert Russell Myers claimed that the...

ROYAL FAMILY Lilibet Anthony - November 13, 2021 0
Circulating reports suggested that Lilibet Diana, the latest addition to the Sussexes family, would follow in the footsteps of her two-year-old brother Archie with...

Recent9ja is your news, entertainment website. We provide you with the latest breaking news straight from the entertainment industry.
© Recent9ja 2021